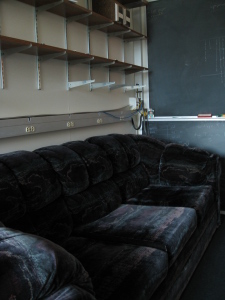 “That’s a nice couch in your office, Patrick.”

When I moved into Edgerton House I realized that trying to live without furniture soon becomes deeply unsatisfactory: the floor just isn’t that great to sit on. To avoid a repeat of that experience, I quickly purchased furniture for my new place.

I found ads for a coffee table set and a couch on craigslist, which were actually posted by the same person. Better yet, this person had a van and offered to transport the furniture to my place. She was selling the coffee table set and a couch set: a one-place, a two-place, and the above three-place couch. My place is small, so I negotiated with her to purchase just the one- and three-place couches, and I recruited Todd (thanks again!) to help me move the couch into and out of the van.

We loaded the van without incident and brought the furniture to my front door. I thanked the seller for her help with the van…

… two hours later, after trying all of the different ways (front up, bottom down; front down, bottom up; vertically—no, too high for the porch roof!) to bring the couch into the building, I covered the couch with tarps to protect it from the rainstorm that night. The issue was the 90-degree turn required to bring anything inside. The rain kept me up all night: I worried about my new-to-me couch getting wet and growing mildew.

Todd was happy to learn that the professional movers I called in also did not succeed. (“We don’t often get skunked.”) It was apparently not just that we were dumb. So, with Ondrej’s help, I bought the two-place couch from the seller, brought into my place, and moved the three-place couch into my office. AV carts are great for moving couches, by the way.

[PS 2 Apr 2020: When we moved into our new place, 300m away from the old place, I repatriated this couch and got another one for the office (which is currently inaccessible due to the University being physically closed].