Markets itself as “luxury”. The hard product is comparable to business class on a plane (which is much easier to provide since a Yotel doesn’t have to fly), but not comparable to 4* accommodation on land. Is fit for purpose. Comparable to a Hampton Inn with 10x less space. Beats a hostel or a, say, America’s Best Value Inn/Super8, by far.

A couple of days after arriving in Amsterdam, I realized that the first of my returning flights departed at 7AM. Working backwards, I’d need to leave the hotel before 5AM. Yikes! I looked at various hotels near the airport, but the required shuttle negated many of their advantages; it doesn’t take long at all to reach Schiphol from Centraal (but long enough, if aiming for a 7AM flight).

I then found that Yotel has been opening a number of capsule hotels, mostly at airports. Their marketing repeatedly includes words like “luxury”. Sure, worth a try. I booked an overnight stay and they charged my credit card 92EUR (including a 4EUR credit card fee; merchants in the Netherlands seem to have pushed back against the credit card cartel, managing to charge extra fees for credit card transactions all the time, or just not taking cards surprisingly often.)

Getting to the Yotel was super convenient, especially from the conference banquet, which was 5 minutes from the train station. Got train ticket to Schiphol, failed to tap in correctly (double-tapped at Centraal) and hoped for no ticket inspection (on-board announcement: “You can buy your ticket on-board, but there is a penalty fare of 50EUR”), and travelled to the airport at 120km/h (Sprinter, faster than the 80km/h train I’d taken inbound).

The instructions that Yotel had emailed me were clear (“Go to Departures 3 if you are checking in late”), except that I didn’t know what time “late” was, so I did an extra trip to Departures 2. Back at Departures 3, I showed my reservation and boarding pass to the security staff and they let me go airside. People are smarter than machines, which won’t accept a next-day boarding pass. 11PM is a good time to go through security at Schiphol: there were only 3 people ahead of me in line and it went super fast. 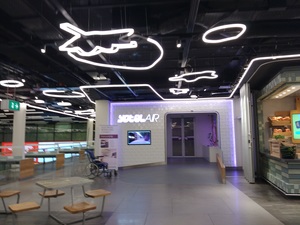 Check-in was efficient–way more efficient than the 4* Movenpick, who was having IT problems due to migrating to a new platform (IT problems? never!). The corridor lighting scheme is dim purple (in accordance with Yotel’s branding). Not sure I like that, but I guess it’s better than blue.

CAPSULE. I’ve travelled across Canada in a train. Trains, of course, are constrained-space environments. Airplanes much more. Airports, too, but to a much lesser extent, since they don’t actually move through space, as opposed to airplanes and trains.

I had booked a Standard Yotel cabin. The Premium cabin is much larger (but still not that big in absolute terms). The Standard cabin makes… efficient usage of space. The bed is elevated so that they can interleave cabins. They are cool with two people staying in a Standard cabin, but warn that it would be cramped. If you’re not trying to be as cheap as a student, you probably want the Premium cabin for two people plus luggage. 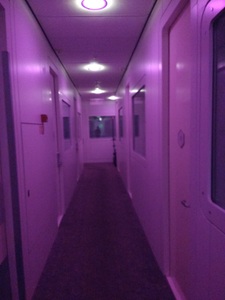 Finishes don’t feel luxurious, although admittedly not cheap either. I’d say somewhere in the unostentatious middle. Come to think of it, pretty similar to Gastprofessor housing provided by ETHZ.

A bit about the capsule configuration. On one side is the bathroom—toilet, shower and sink. On the other side, at about 1m up (step provided) is the bed. In the middle there’s a small corridor, with desk and stool (stored on the wall). Although of course there is no natural light, the room is not completely dark due to the lights on the light switch.

Due to technical reasons, I assume, the drain is super noisy. I think that when it senses the presence of water, it activates a pump which makes gurgling noises. This doesn’t actually bother me, but seems out of place if one is advertising “luxury”.

They provide all the outlets. Although my sample size is just 2, wired Ethernet seems more available in the Netherlands than it is elsewhere these days. Yotel provides it. They also provide good Internet. They advertise blazingly-fast, so I had to check. Speedtest: 15MBit down, 6MBit up. ZRH airport wireless is faster, at 18MBit down, 22MBit up.

For one person, Standard would be more than enough room if one had optimally packed luggage in advance, e.g. toiletries and next day’s clothing easily accessible (not that hard, really). But, for the rest of us, the limited room in the middle corridor is a bit of a pain if one has to rummage through one’s luggage.

BED. Good enough. Comparable to the one in the Movenpick, so I guess in that sense it qualifies as “luxury”. Good pillow (plus extra pillow available). Standard European blanket. Size: bigger than “twin”, smaller than “double”.

I couldn’t sleep until 3, but that was the same result as I had at the Movenpick, so I can’t blame Yotel for that. Noise level was acceptable—about the same as Movenpick.

Checkout was efficient as well. They offered tea/coffee/hot chocolate, but I thought I’d better get to my gate, so I can’t judge.

Unfortunately, they are in the non-Schengen area of the airport, so I had to wait in line at customs for 7 minutes. Still, getting up at 6 was just about right for 6:35 boarding time, including shower.

VERDICT. Good enough. Super convenient. Definitely not 4*. Would recommend for AMS 7AM flights. Would not use for 11AM flights (because then you’re at the airport all morning; why would you spend extra time at an airport?)