One of my strange hobbies is walking to or from airports. In the ideal case it is walking between the airport and the place I am sleeping. I flew into YOW in December 2019 and had the opportunity to take a 13km walk.

From YOW, out on Paul Benoit Driveway past the Ottawa Hunt and Golf Club, to Riverside Dr, meeting the Rideau River at Mooney’s Bay and “civilization” at Billings Bridge, then across the Rideau on Bank through the Glebe and Centretown to Albert St and my destination.

This would be an all-transit day. I took Grand River Transit to the Kitchener station and then the GO train to Weston and the UP Express to Pearson.

This used to be much harder than it is now. Credit to Metrolinx for upgrading the frequency of connections from Kitchener to Toronto, if not the speed. I wrote about this in 2008 and 2019.

I studied the map and noticed that it should be possible to take Clear Skies Private to Paul Benoit Driveway, and indeed followed a couple of airport workers that way. (It’s kind of strange to me that they named a road after the former YOW CEO who is very much still alive, but I guess he was influential). There were more people than I expected on the sidewalks here, but there is actually CFB Ottawa South nearby as well as staff parking. I think I counted almost a dozen runners and a couple of people on bicycles. The Internet suggests that Paul Benoit can also be a faster way to the airport by taxi but that it is subject to traffic enforcement by military police.

After a couple of airport hotels (they don’t count for the purpose of walking to airports!) I got to the Ottawa Hunt and Golf Club, which lets people on foot and on bicycles through. Otherwise it would be a 1km detour, though it would also swing by Ottawa’s T&T and I would have been able to get tasty snacks.

Onwards to Riverside Drive and past a couple of highly-rated restaurants that I did not try. I was on a mission.

I’d never really thought about it, but it’s not just the canal. The canal is associated with the Rideau River. I’d heard of Mooney’s Bay before. Here it was, as well as its park and beach. Not great beach weather for me, although -7C is quite good walking weather when there is no wind and it is sunny.

I continued walking along Riverside Dr along a segment where it resembled an urban highway more than a street. Still, it eventually got me to the facsimile of civilization that is Billings Bridge (hey, it’s got McDonald’s).

The last part of the walk would be through urban parts of Ottawa (all yellow on the Google Maps). I took a break at a Shopper’s Drug Mart to get a flu shot. The pharmacist thought I lived on a street nearby, but that just happens to be the same name (though not street type) as one in Waterloo. “Nope, I live 500km away”. Maybe the Glebe is one of the most urban-village parts of Ottawa but when I walk through one of these places I’m reminded that Kitchener-Waterloo isn’t a real city yet. The Rideau Canal was definitely not in skating condition yet.

The walking time for this 13km trip was about what I expected, 2.5 to 3 hours. The flu shot certainly threw off the timing. It was a good test walk for hiking in New Zealand. This distance on this class 1 terrain should be absolutely easy, but the shoe upper had failed a few months ago and I was putting off doing something about it, so I got a blister. And the ankle is still not completely healed from the October sprain. Healing continues and I hope it’ll be good enough for some good New Zealand hikes, er, tramps.

I also got around to riding the Ottawa LRT a few days later. It’s certainly more fancy than Waterloo’s LRT and runs faster and more often (when it runs). But it also cost a lot more.

We got some snow. Maybe this animation will work in your browser. It won’t animate in my Firefox or Chromium. 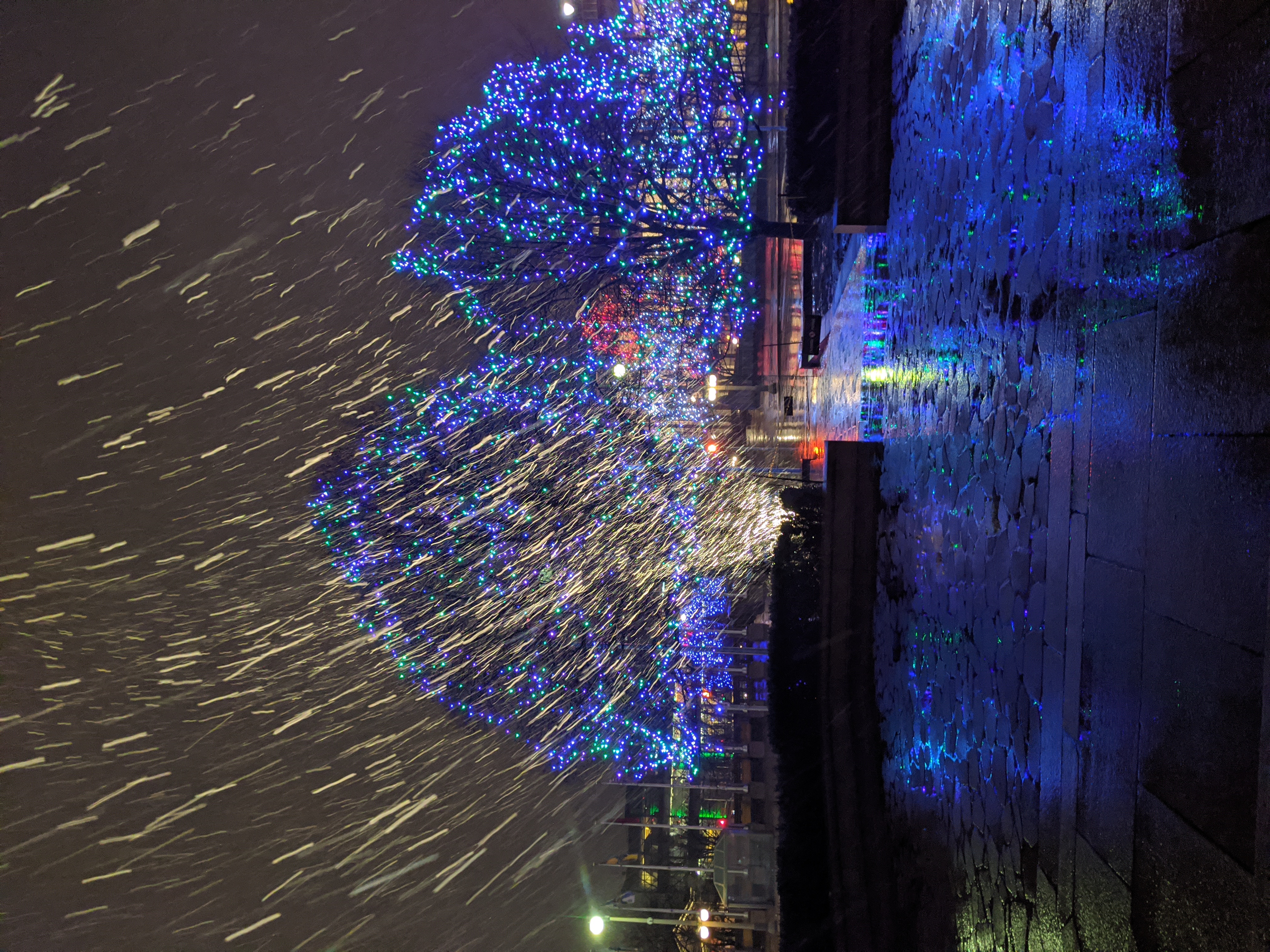