All the pictures: gallery

As soon as the Great Walks bookings opened after lockdown, we thought we would sign up for at least one, to see what they were like. At this point I can’t remember why, but we chose the Heaphy Track as our first Great Walk. This is the longest great walk at 82km, and we would be doing it in the middle of the “winter”, sharing the track with mountain bikes.

Heaphy is one-way, so logistics are somewhat complicated, especially in the off-season. Thing is, although it’s only 82km on-trail, it’s 431 road kms (the long way around), which takes 7 hours in New Zealand. Some people bike the round-trip to avoid these complications. For us, flying looked to be about the same price as getting shuttled in a van, and more scenic. There is also an ultrarunner who will drive your car to the other end.

Before sunrise, we left for the ferry from Wellington (bus to train station to shuttle) to Picton and then the bus to Nelson, getting a pie in Picton while waiting for the bus. The chatty InterCity bus driver had just gotten back to work and was thrilled about that. We were the only people getting on at Picton but there were quite a few people going from Blenheim to Nelson (connecting from Christchurch?). The bus passed through Havelock (where I’d been a few weeks ago) and then on to Nelson, where the bus dropped us 450m from our hotel. If we can walk 82km, surely we can walk 450m.

We went to visit the DOC staff, who were stationed at the Nelson i-SITE (tourist information centre). The weather was looking pretty wet, and later would be better than earlier. Since there were very few people on the track at this time of year, we learned that we could basically arbitrarily change the booking dates for free; our only constraint was making it to Akaroa for the penguin tour, scheduled for July 10. So we aimed to shift everything one day later.

I called Golden Bay Air, who called back while we were getting some last-minute provisions in the Countdown Nelson supermarket. Aircraft availability was somewhat limited, but in the end we agreed to go to Takaka as originally scheduled (July 5) and then get shuttled to the start of the hike on July 6, finishing on July 9 and flying back to Nelson. The plane wasn’t available on July 6. Changing the dates on the DOC site was straightforward and I did it while walking down the street in Nelson.

Continuing a trend for this year, we had a room reserved for July 9 in Nelson that we couldn’t use. Obviously we should not reserve in advance.

Our pilot called us in the morning and said that the weather was “quite average”. On such days he gets to drive the van from Takaka to Nelson and back to Takaka (2h each way) instead of flying us. I guess this wouldn’t be the day to walk to the Nelson airport.

People told us Takaka is kind of a hippie town (“vibrant and bare-foot culture”). For a hippie town, it also has a bunch of rules: perhaps understandably, it bans so-called freedom camping (there is one place where self contained vehicles ma park); but it also bans dogs from the downtown (“the sidewalk is too narrow!”).

For those who hadn’t provisioned in Nelson, the FreshChoice supermarket in Takaka has a full collection of dehydrated foods (see below for all the food).

In any case, after a leisurely brunch in a local cafe, we walked to the Labyrinth Rocks, photographing pūkeko and shelducks along the way. There would be a few more options if we had either climbing gear (not so useful in the rain) or a car to reach the Te Waikoropupū Springs. Dinner at O’Sha, a relatively new Thai restaurant, wasn’t bad.

I fetched a double cheeseburger pie from the nearby dairy (I think they actually just put the cheeseburger ingredients in the pie; I wouldn’t get that again) and our shuttle driver (not the pilot) picked us up for the 1-hour drive at 9am.

The Brown Hut, 10 minutes from the trailhead, would be kind of a strange place to stay these days. This hut is not that far from Takaka, is about the same price as where we stayed, and doesn’t have WiFi. I’m not sure why one would stay there in modern times (maybe historically, when it was harder to get out there and there were less conveniences in town).

It barely rained on us, and we got occasional blue sky, but we did see 6 rainbows (including 1 double rainbow). We took a brief detour to Flanagan’s Corner, the highest point near the trail itself. We arrived at the Perry Saddle Hut 5h40 after leaving the trailhead, including a 20 minute lunch break (bagel sandwiches, prepared last night by MP) and the 10 minute detour. Trail conditions were mostly civilized except for a tree that looked like a bit of a pain to throw a bike across.

At the hut there was Stephen, an American who was still in New Zealand and mountain biking the track. His usual Antarctica gig wasn’t happening this year. There was also a party of 4 who would be hiking along with us. Three rooms, three parties. Pretty good. There was just a weird thing about the hut lights (solar) not quite turning on when we’d want them to. More like random. We played this card game “Cloak of Protection” where the goal was to collect NZ birds.

The Perry Saddle Hut whiteboards had various Ranger-provided information, including: how to operate the gas stoves; about the caves near Goulard Downs; and how to distinguish wekas from kiwis (both brown, but wekas have wings and tails).

We did see lots of wekas everywhere, including some quite forward ones at Goulard Downs (and later at Heaphy Hut).

The caves go under the trail. So you can walk on the trail as well as under it. We walked straight past the Saxon Hut being cold and wet, but still moving. Turns out that people had left a fire going in the woodstove, and the hut would have been warm, and also a good place to spot released takahe.

There were also a couple of major stream crossings (e.g. “Big River”). Historically crossings have been a cause of mortality among Heaphy Track walkers. But the bridges are quite good now. There were two minor streams that were shallow but still wet. Also some springs next to the boardwalks.

We had quite a bit of clothing to dry at James Mackay. But so did everyone else. Pro tip: closing the woodstove makes it burn more effectively. It was a bit cold in the hut while wearing our wet clothing. Brr.

We took 7 hours but lunch + caves was an hour. From the Mackay Hut we could see the Tasman sea. The end is in sight (but still quite far!).

Perhaps the highlight was the pied shag (comorant) viewing 20 minutes from Heaphy Hut. There were quite a few that hadn’t left the nest yet and were wanting to be fed. Not just that, but there was also a kereru (NZ pigeon) in the tree behind us.

Apart from that, the hiking was not wet and fairly easy (downhill). The Heaphy Hut is a bit back from the shoreline, but it’s easy to go out to the beach from the hut. Our food was much lighter but we still had enough food for another day probably. But it’s the bars that we weren’t super keen on eating. We were an hour below the advertised time, subtracting a 40 minute lunch break and a 20 minute photography break. 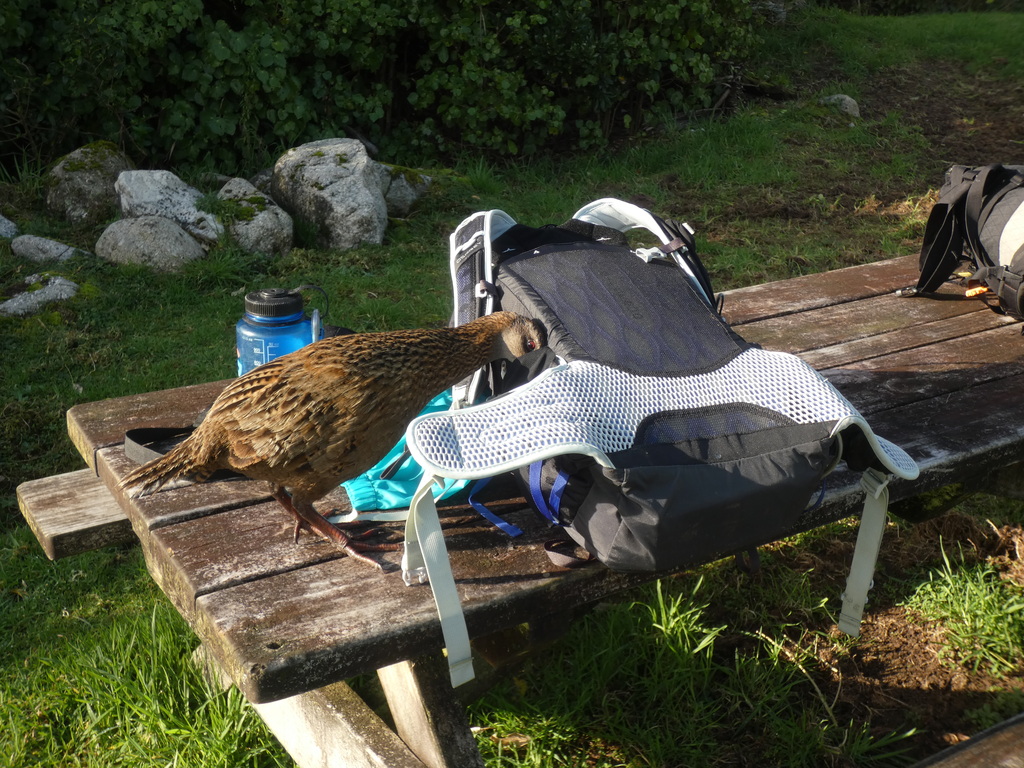 Hungry hungry weka
When we arrived at the Heaphy Hut there were yet more wekas, some of whom were quite bold in looking for food in our bags. They're not as smart as kakas and can't open the zippers, and the bags were heavy enough to be not draggable, so our food was safe. There were also fantails and we heard but didn't see kiwis.

July 9: Heaphy Day 4, to Nelson and then to Christchurch (gallery)

This was a super long day all told. Also the most scenic day on the Heaphy, along the beach. I’d read about how people had talked about building a highway there. Good thing they didn’t.

The flight had to be early enough for the plane to proceed to a Wellington segment (not including us). So we needed to be at the end of the track by 11:30. With a 5h advertised walking time, we figured that we should aim to leave for 6:30.

With that departure time, we did hear wild kiwi while walking. We didn’t really see any, except that MP saw an unidentified brown flash, which also probably wasn’t a weka. Also something that jumped in a mammal-like way.

The sunrise and changing colours on the beach were spectacular, along with the nikaus (which the inbound Polynesians were disappointed to learn did not have coconuts). Also, being on the track meant that we weren’t too sleep deprived for a 6am start. Still not our favourite time of day, but worth it. I guess.

There were some river crossings but they had bridges. Here and on the Rakiura Track I saw some streams that had significant wave action bringing salt water upstream.

I had hoped to have more slack time at the end of the track but the van had gotten there ahead of time, due to a not-super-fast morning start and a slower second half of the walk. Well, better than getting eaten by sandflies for 3 hours.

As mentioned above, we now needed to combine the last day of the Heaphy with travel to Christchurch. That would have been quite difficult if we had needed to go by road. Fortunately the weather was spectacular, so our pilot came to the Karamea Aerodrome with the GippsAero GA8 Airvan. Before boarding the plane, we found that our packs finished the hike at around 5.5kg each; they were around 8-9kg at the start. I’ll leave it as an exercise for the reader to sum the weights of the food in the last picture (on the blanket).

We flew back over the top of the Southern Alps and back to Nelson in 30 minutes, a trip that had taken us 4 days on foot. July here is the start of winter and there were some snow-covered mountains but the snow wasn’t very deep; it looks like one would have a hard time sinking an ice axe. The Twins were the most prominent peaks we saw; maybe some day we’ll climb them. It was a great flight for photos and the pilot also brought cameras to take promo shots.

After landing in Nelson, we picked up our rental car and drove back to the hotel we’d stayed in, where we picked up some food that we’d forgotten. Sadly, that was some negative progress, but we had a nice chat with the hotel owner, who was hoping to cash in on land appreciation one of these days.

Then there was a 5 hour drive to Christchurch via Lewis Pass. Unfortunately I’d forgotten that I had already booked an airbnb, and we double reserved accommodation along the way. (Tripit stored the reservation in the defunct Athens trip, which was technically a valid place to store it, but not really).

Dinner was at Costas Taverna in a suburban Christchurch power centre. Despite the location, it was quite good.