Almost as if anticipating a lockdown, we had planned back-to-back-to-back trips for the middle of March. We’d just barely gotten back from Queenstown on Thursday, March 12 (but that’s another story), and had scheduled 4 days to climb Mount Taranaki, which I’d seen from the plane on the way in to Wellington back on January 1, 3 months and so long ago. Events would catch up to us and prevent our subsequent trip to Melbourne. At least we didn’t have to do a visa run anymore. 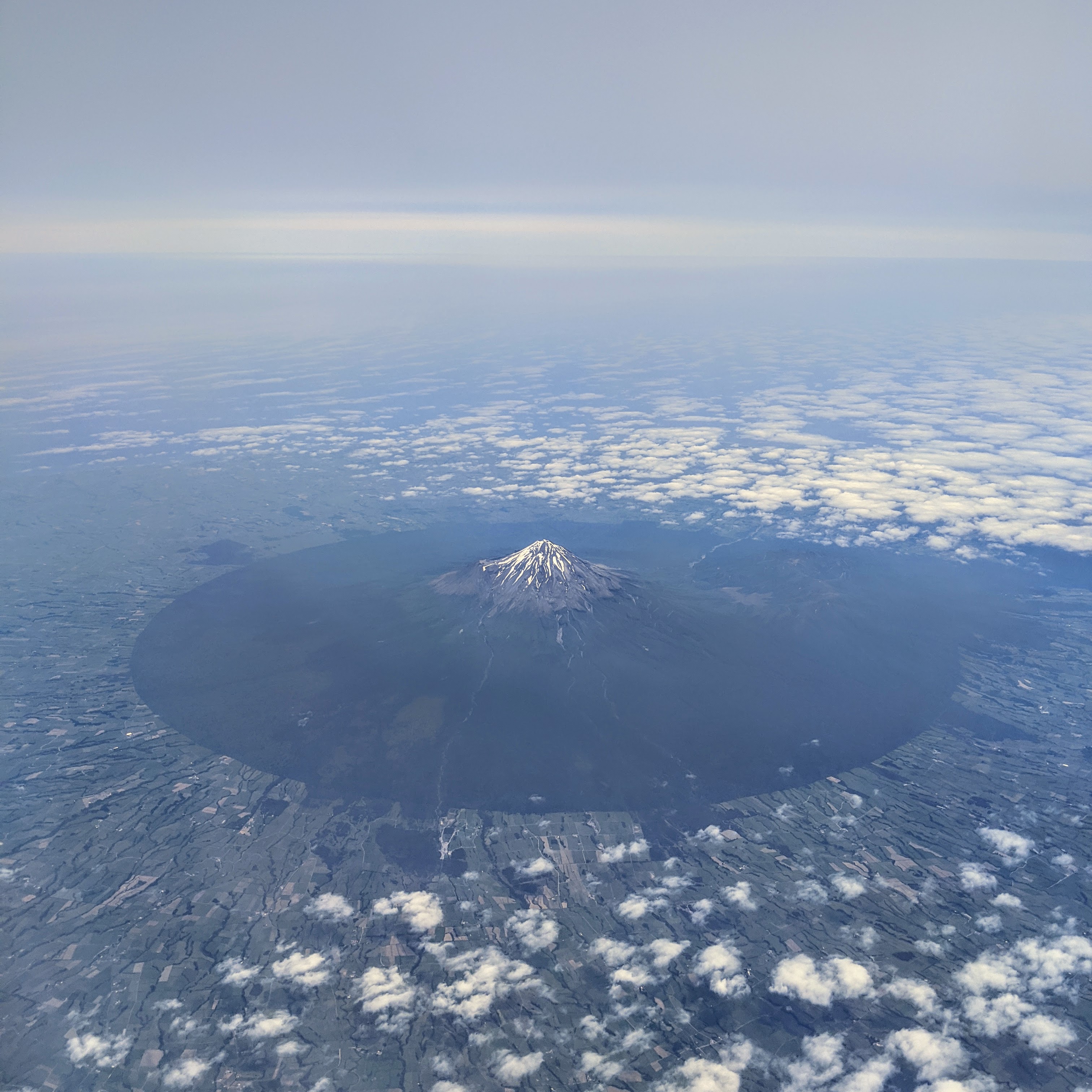 The original plan was to take the Mt. Taranaki Summit Track over 2 days. We’d pick up the car on Monday afternoon, drive to the park, walk up 2 hours to Tahurangi Lodge, sleep overnight, summit, then back to car.

We had three whole days to pack, so of course there was last minute packing on Sunday for our Taranaki trip. I don’t like being that last-minute and packing on the day of departure.

Dropped the cat off at the cattery, met with Victoria University of Wellington colleagues Jens and Dave to talk about research, then picked up the car at Apex Car Rentals down the hill (the closest possible place to rent a car when living in Kelburn).

We’d planned to drive to base of Taranaki and hike up to Tahurangi Lodge for a Tuesday summit, leaving a bunch of weather days before our return on Thursday and scheduled departure for Melbourne on Friday (ha). Sunset is getting earlier. Let’s throw in a table.

Time crunch! So we had lunch at McDonald’s (first McD in NZ for me). They have pies, and you can order them with the combos!

I got MP to drive so that I could figure out the plan. I saw that MetService was forecasting 80 km/h winds at the summit for Tuesday. That sounded like a good reason to use the weather days. I managed to change the Tahurangi Lodge reservation from Monday to Tuesday (thanks Taranaki Alpine Club volunteers!), but not the hotels.com B&B reservation for Tuesday. We then got a hotel booking for Monday night in New Plymouth.

We hadn’t had time to buy hike food so we stopped in Four Square Waverley along the way to get more food.

We walked along the New Plymouth Coastal Walkway and then had tasty Italian food at Area 41 after our first choice was closed on Mondays. 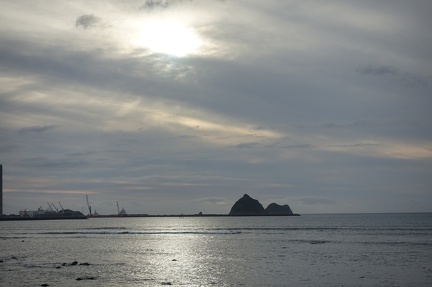 Tuesday, March 17: Up to Tahurangi Lodge

Weather looked like it would work out: cloudy plus gale-force winds on Tuesday, but “fine” (NZ-ish for “sunny”) on Wednesday when it counted. Two hours to the lodge… how hard could it be? We took a leisurely brunch at Petit Paris next to the hotel.

As I tried to leave I discovered a flat tire! Fortunately there was a tyre shop 300m away. We installed the spare tire and the tyre shop fixed our tire for $25.

We drove to the North Egmont Visitor Centre, where I checked out the scene. They have one of Sir Edmund Hillary’s ice axes. There were lots of people waiting around and using the Internet. They weren’t going up today either. We eventually left for the Lodge. For once, we beat the time estimate, getting there in 1 hour 10 minutes from the Visitor Center.

The Lodge is well-appointed. We used the kitchen to heat our ramen. One could make something fancy if one is willing to cart the ingredients 500m uphill. Indeed, the kitchen is better than what we have right now in Wellington, although that’s not saying much, since we equipped our Wellington kitchen hours before lockdown.

We thought we’d be alone at the Lodge but then a couple from Levin showed up around 11pm. They reported that there were heaps of people sleeping in the parking lot and aiming for an early summit.

We decided to sleep in the bunk rooms, which perhaps were not the best choice with the noisy winds. Maybe the main room would have been better.

The clouds had all disappeared overnight. The wind was forecast to settle down the longer we waited, so I figured that an alpine start was not the way to go. We left around 8 for the remaining 1000m of elevation gain to the summit. At upper elevations there was thick ice on the wayfinding posts, surely due to the fog/precipitation the previous night. The small snowfield was still pretty hard but the crux of the ascent was the slippery icy terrain just before the snowfield. Otherwise it was at most easy third class.

The descent on scree was more annoying, especially when it was a thin layer of ball bearings on hardpack. Skis would be much easier.

Once we got back to the Lodge we used the nearby cell tower to work on various housing-related issues (i.e. ensuring that we wouldn’t be homeless in a week), as well as eating all of our food and some ramen that got left behind.

At the car, we found several problems. Fifteen minutes later I found the car key in some random place. Somehow not any of the obvious places. Funny enough, the car was actually quite hard to lock, and we found that it was unlocked, but that doesn’t help us drive the car away.

Then the car once again had a flat tire. Back to the donut. Since it was 5:30, there were no tire repair options except New Plymouth. So we went back there and had a nice long hold time with hotels.com, who changed the non-refundable reservation on the basis that we couldn’t safely get to Whanagui as planned. Had non-tasty sushi at St. Pierre’s and then a milkshake and not-a-poutine at the Deluxe Diner. Turned out that it was next to the tyre shop which, had we looked, posted an after-hours phone number. Didn’t take a good Taranaki picture.

Thursday, March 19: Last travel day for a while

Went to Simpsons Tyre & Service Centre, which was $37 but which also found the second nail. Got groceries at New World. We had heard of impending bread shortages. New World Plymouth had heaps of bread at 8am but also a 3-per-customer limit. Pie at the Stratford Cafe, headphones at Noel Leeming in Whanagui, picked up the cat, returned the car early, and biked to judo practice.

The Summit Track is quite direct (i.e. almost no switchbacking) and among the steepest trails I’ve been on; my phone told me things like “600m remaining” with a remaining elevation gain of 300m.

Times and elevations extracted from GPS coords in pictures.