On our previous trip to the South Island we stayed around Wanaka cragging and hiking. Although the Darrens were still washed out during our visit, The Remarkables feature some multipitch climbing. In particular, our borrowed Queenstown guidebook listed a dozen climbs above Lake Alta (aka Dimrill Dale). We’d go to Lake Alta and then up to Double Cone and find a moderate climb.

Alpine starts are well advised but difficult, especially after riverboarding the previous day, having dinner in Queenstown with Waterloo students on exchange, and getting back to our Frankton airbnb at 9pm. We managed to leave the airbnb 30 minutes after sunrise and drove up to the Remarkables ski field. It shouldn’t be a surprise to anyone who’s driven in New Zealand, but Google Maps estimated that the 16km would take 25 minutes. In this case, the last 13km to the ski field also gain 1300m of elevation. I very much appreciated motorized transport here. In any case, we got to the parking lot at 8:30am. This meant that we had 11 hours 30 minutes before sunset at 8:00pm. One would think that would be fine for a relatively short climb.

Turns out that the ski field was in the middle of putting up a new chairlift. It was interesting to see how they staged the materiel. And we got to enjoy occasional construction noise (plus dynamiting later in the day).

From there it looked like we were close to the base but we took another hour to get around the lake on a climber’s trail and only by 2:39pm did finally we get to the base of our climb, George, which was supposed to be 5 pitches (grades 14, 14, 13, 14, 9). That last part of the approach also involved 400m of elevation gain.

I think that the guidebook’s 1h30 of approach is from the end of the Lake Alta track. We still exceeded that by quite a bit, especially including the amount of time it took to confirm the route. We had some discussion about what to climb, and the fact that I hadn’t brought double ropes from Canada was somewhat limiting. (Can’t bring everything, alas, and something I’m regretting more as we’re in line to be here for ski season.) The scree climb at the end of the approach was tiring because of elevation gain, but it was fairly solid, especially compared to Rockies scree.

We heard that sometimes people see keas around the Remarkables but we didn’t see any.

However, we did see a chamois. We were wondering why someone would import chamois to New Zealand. Apparently hunting is allowed.

Pitch difficulty and routefinding was manageable for the first three pitches, although I felt like I didn’t always put anchors in optimal places. I don’t know how this happened, but it felt like the top of my p3 was near p4 in the book. But that doesn’t really make sense, because the book says that the first three pitches should be 140m. I had a 70m rope. One of the pitches was the full 70m but others were far shorter. Pitch 4 was supposed to be rock at grade 14 but I did a scramble/grass climb instead, avoiding what was in retrospect the Petit Couloir. I had a couple of look-arounds at the base of pitch 4 and noticed the Petit Couloir rap anchor. All pretty confusing. Bolt anchors help a lot for routefinding, and there weren’t any here. 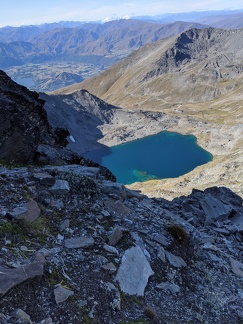 In any case, the climbing was quite reasonable (especially compared to other New Zealand climbs) and we were at the top 3.5 hours after leaving the bottom. Pitches went at about 40-50 minutes each, including setting up gear anchors. This got us to the summit (Double Cone North Peak) at 17:55, so 2 hours before sunset.

The guidebook discusses two options: if one summits Double Cone vs not. The “not” option wasn’t available to us, not just because we were on the summit, but also because it supposedly requires 50m rappels. (One never really knows but it sucks to find that the 50m rappel is actually required). So the instruction was supposedly “either traverse to Single Cone and climb down the descent route or scramble down the Grand Couloir”. I was hoping that the descent would be clear from the summit, but it totally wasn’t. We downclimbed to the couloir. Looking at it now, the guidebook says “a steep rock slab leads to an exposed arete”, which looked 5th class to me.

Note: I’d taken pictures of the book but MP wanted to take up the actual book. That turned out to be quite useful. Navigation was still hard, but would have been harder from dodgy photos. Taking someone who has been on the route would be easiest.

In any case, we decided that the rap down Petit Couloir would be best; rappelling looked like a better bet than downclimbing potentially steep and wet terrain. There were 3 or 4 sling rappel stations. Only once did we knock down big rocks. We got to the end of the rappels at 8:00pm having lost 100m of elevation. So that left us 500m of elevation to lose after sunset.

The scree was tiresome and, as always, harder to descend than to ascend. It turns out that it took us 3 hours to get back to the top of the chairlift (advertised as a 1h30 approach, and which took us 5 hours on the way in, but not at top speed). Navigation once we got to the lake looked like it should be easy but was harder than expected and we almost got cliffed, having to go out of our way to walk down. MapsWithMe’s trail indications eventually got us back to the trail.

Getting to the car took us another 40 minutes in the dark even on super easy gravel for a total of 15 hours car-to-car.

Back to Queenstown and Wanaka

Going downhill in the car we chased a pair of bunnies for a good 2km at 20km/h and saw a possum on the road. We then picked up Yingning and her friend in Queenstown (our arrival time kept on getting later) and drove to Wanaka.